Spring Cleaning: How to Donate Used Clothing & Other Goods

Springtime brings all kinds of ideas and possibilities. Something that’s become a pastime is the ritual of spring cleaning.

A good “Spring Cleaning” can occur any time of year, of course. It’s just a matter of making the time, having the will and getting your home organized. Part of this often includes gathering up used clothes and other items that you haven’t used in a while, sorting through everything and giving away items.

In this article we’ll cover ways to sort and categorize these items, deciding what to donate to charity or thrift stores versus what to recycle or repurpose.

What Should Not Be Donated?

We at Bank & Vogue are dedicated to a more sustainable environment, leaving our planet in better shape than when we inherited it.

That’s why donating clothing and other used goods to charities and thrift stores makes good sense. 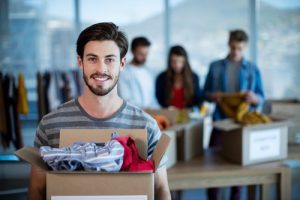 Having said that, there are certain items that must not be donated. These include items that are:

At this time, donation centres cannot process the above items, and donating these (despite the best of intentions) creates a burden for them in the form of needing to dispose of large quantities of what is now waste (at an additional cost to the charity or thrift store).

Another category would include items that may appear to be in decent shape but, due to the custom nature of their personal usage, these garments cannot be sold or given to other people. These cover the range of:

While we’d rather not see anything end up in landfill, please be sure not to donate the aforementioned used clothing and other goods of a certain condition or nature.

If you are confident that an item would sell in North America, go ahead and donate it. But bear in mind that many of these items end up not selling in thrift stores, but rather go to markets such as Africa or Latin America.

Items such as winter boots, gloves, hats etc. aren’t likely to be used in tropical markets.

How Should Donations Be Organized? 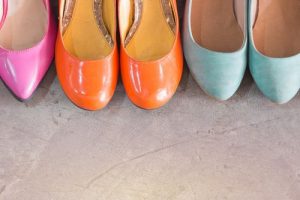 When making a donation of used clothing, toys, shoes, etc., it is particularly helpful to the charity or thrift store if you can organize the containers (bags, boxes, etc.) by category.

Rather than just putting everything into one container, or having items strewn about several containers without rhyme or reason, we’d ask that you try to divide your items into piles and then keep them in separate containers. Thus as you’re organizing at home, you’d end up with separate piles (and eventually separate bags or boxes) of:

A little effort on your part can save a lot of time (and thus money) for that charity that you’re intending to help out.

Also, when packing the items for donation, be sure that no liquids or sharp objects are contained in the boxes or bags. We want to make things as simple and safe for our partners at the donation centres.

How Bank & Vogue Plays a Role

At Bank & Vogue, while we’re not a donation centre or thrift store, we work with such organizations every day.

We’re involved in the buying and selling of bulk credential clothing, mixed rags and other used household goods, as well as facilitating the logistics thereof. We’ve partnered with thrift stores and charities to keep used clothes, shoes, purses belts, toys and other goods in use, be it sold by thrift stores, repurposed for second or third lives, or sent overseas for use in other markets.

If you’re looking to buy or sell credential clothing or used goods in bulk, get in touch with us today to find out how Bank & Vogue can help.