How Mixed Rag Clothing Can Address the ‘Crisis of Stuff’

Amid a growing concern over waste and its impact on the environment, experts remind consumers that clothing has an enormous, toxic, environmental footprint. This economic effect grows into a greater negative as consumers unnecessarily waste material, or they fail to use materials to the fullest of their capacity. Ecosalon reminds readers that clothing should have not only multiple uses, but multiple lives through multiple owners and the process of textile recycling. While most of our clothing is 100% recyclable, it is often the case that a significant amount of our discarded and cast-off clothing articles is discarded in the trash or in landfills. According to the U.S. EPA, US citizens, on average, waste nearly 70 pounds of clothing and textiles per year — with these numbers estimating over 80 billion garments annually worldwide. In the US alone, municipal waste occupies approximately 5% of all landfill space — or 13.1 million tons of ‘stuff.’

Thankfully, the surge in interest in mixed rag clothing and its associated market is helping reverse or at least change the direction of this trend. In light of the ‘crisis of stuff’ and the awareness being drawn to its challenges, consumers and producers alike are recognizing the need to donate and recycle materials, namely mixed rags, in an amount that has totalled nearly 3.8 billion pounds of post-consumer textile waste (PCTW) each year. At Bank & Vogue, we are doing our part to address our global ‘crisis of stuff’ by piecing together mixed rags from various locations across American and Canadian markets. This process entails collecting mixed rags materials from businesses that range from large and small thrift store retailers, to not-for-profit community-based collectors, and even private collectors and consolidators. In doing so, we have contributed to an environmentally green initiative that saves nearly four billion pounds of used clothing from landfills. 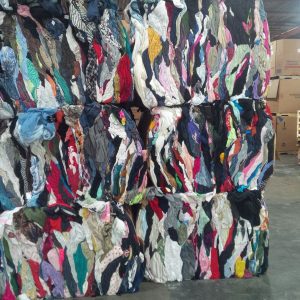 So how exactly does the mixed rags market address the ‘crisis of stuff’? First, mixed rags supply actively search for materials that are the result of store returns, thrift store or discount apparel stores excesses. These are typically either items that qualify as ‘used’ in that they are donated to thrift or charity spaces and remain unsold, or are designated as imperfect (this might entail clothing stains, worn material, rips, broken or jammed zippers or missing buttons or clips). Once their quality has been assessed, these materials are often removed from storefronts and migrated to a warehouse for other buyers. As ‘mixed rags,’ these items typically include a range of materials such as: used shoes, household textiles such as linens and towels, and used clothing for sale in bulk and at deeply discounted wholesale rates to companies that will take on these materials to sell for new buying audiences. Given the wide variety of materials, it is also the case that the benefits of mixed rag items span a range of benefits. First, mixed rag materials simultaneously address environmental impact while also generating cost saving benefits for those who become their new owners. Mixed rag items do so by re-directing used materials to a variety of other industries. This is especially true of 45% of materials labelled ‘mixed rags’ which tend to be sold as secondhand clothing to other domestic or overseas markets. An addition 50% of materials are re-made into rags for industrial markets and shredded into fiber that can be used to fill couches, chairs, carpet padding, and home insulation among other household items.

With the help of the ‘mixed rags’ industry, consumers, especially those who are environmentally thoughtful, are addressing the global ‘crisis of stuff.’ Despite this global waste problem, namely the nearly 85% of all PCTW that ends up in our landfills, the recycling industry and its associated processes are thankfully able to recover approximately 3.8 billion pounds of post-consumer textile waste (PCTW) annually. This number represents a growing phenomenon that users and new fans of mixed rags are contributing to. 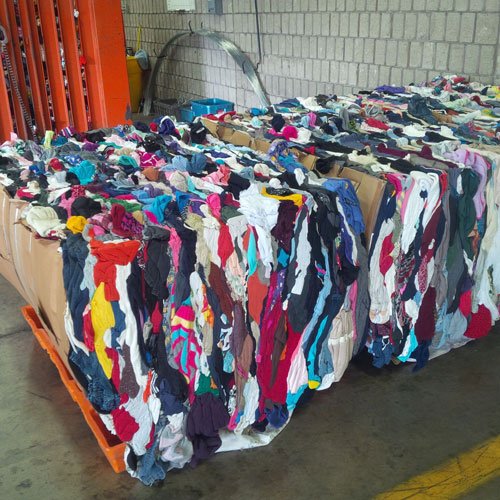