Many studies show that millennials are actively finding solutions to address the negative implications and outcomes of a disposable fast fashion global marketplace. Thrifting has now become more than a mainstream music suggestion provided by rapper Macklemore in his hit song “Thriftshop.” Millennials are now incorporating this practice into their daily practice in order to reduce the overflow of landfills, save a substantial amount of their disposable income, and keep up with constantly changing trends of a fast fashion marketplace.

Recent statistics from the U.S Environmental Protection Agency indicates that in the United States alone, nearly 10.5 million tons of textiles go to waste annually – this translates to nearly 70 pounds of textiles per US citizen. Experts have proven that this social issue is in large part due to the rise of “fast fashion” – a marketplace practice that allows producers and consumers to generate and use cheaper lower quality grade materials that do not last as long and are disposed at a much higher and faster rate. This phenomenon, as you might imagine, is devastating to the environment.

There are however a number of consumers who are cognizant of this environmental and economic issue and have as a result, responsibly begun to address the rise of fast fashion.

So, what has been the response?

Consumers have begun to donate textiles in large amounts – and in turn, consume those donations. Experts estimate that in the United States alone, citizens donate nearly 5 billion pounds of clothing and other miscellaneous materials yearly. One of the key ways they do so is through the “mixed rags” process of textile recycling. This process necessitates that clothing/material was either not sold in a resale, or was not suitable for resale (these materials would have initially been made available at thrift store locations or discount apparel stores). The reasons for this might be that the materials had some sort of imperfection – stains, rips, broken zippers or missing buttons. Typically, mixed rag items include a variety of items such as clothing, shoes, and even household textiles such as linens and towels. After mixed rags materials are donated to a thrift store or charity and cannot be sold, they are then removed from the storefront, turned over to a textile recycling retailer, sent to a warehouse, sorted and compressed into bales, and stored until they can be re-sold to a new owner. 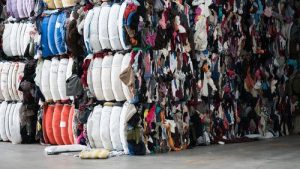 Statistics indicate that mixed rags items have four major uses: First, nearly 45% of materials labeled mixed rags are sold as secondhand clothing to other domestic or overseas markets. The second major use is for industrial markets – nearly 30% make their way to this market. These items include wiping rags for the automotive, home improvement and manufacturing industries. The third option is shredding materials into fibre for materials such as couches and chairs, carpet padding, home insulation, blankets, tablet, and phone cases. This percentage of the market amounts to an approximate 20%. Finally, 5% of mixed rag materials are often gotten rid of due to being compromised and therefore deemed unusable due to chemical contamination or water damage.

At Bank & Vogue, we take pride in playing an important role in achieving sustainability in the textile industry. Through the practice of mixed rags, we are able to contribute to a growing industry trend that saves approximately four billion pounds of used clothing from being trashed into landfills per year. Bank & Vogue does so by moving institutional grade used clothing produced initially by second-hand and thrift stores to states and provinces in the United States and Canada. Our clients are generally comprised of large and small thrift store retailers, not-for-profit community-based collectors, and even private collectors and consolidators.

By playing an active role in the mixed rags market, we are willingly and ethically addressing our present-day environmental crisis (the ‘crisis of stuff’) and achieving the sustainability in the textile industry that is needed in order to clean the environment. To learn more about how we go about participating in the mixed rags market, and to learn more about our details on shipping and logistics, please contact our team at 1-866-613-0719 (North America) or 1-613-747-8465 (International). 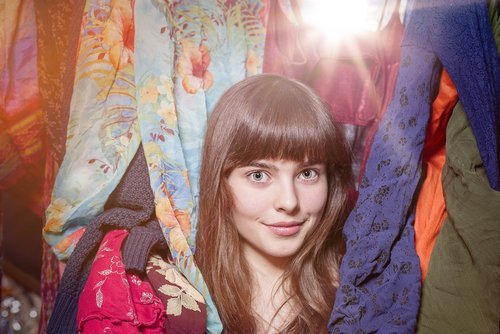